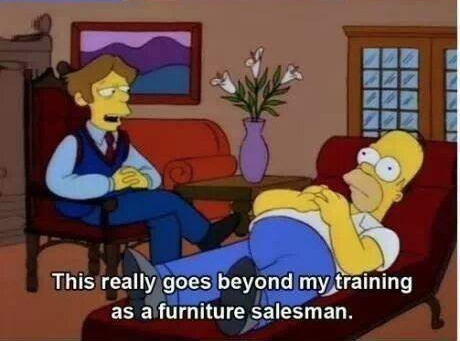 When I was 12 I was sent to see a therapist. The circumstances surrounding the ‘why’ are long and mostly irrelevant, but it involves a dramatically depressing piece of creative writing and a rightfully concerned English teacher. After I submitted said piece of homework thinking I’d just secured myself a juicy A (I only got a B+, still bitter) the teacher contacted my parents and raised concerns that I had just penned a short story morose enough to make Sylvia Plath shed a tear. Thus I was sent to see Fraser.

Looking back over a decade later I can see exactly why Fraser made such a good child therapist. With his long hair, tasteful stubble, calm demeanour and bitchin’ motorbike, he epitomised cool. He had the sort of look and aura that was one university professorship and a student sex scandal away from being the perfect cliché. He was the ideal guy to be able to relate to troubled teens; pity for him that I was so introverted and opposed to any form of human communication that no amount of swagger could pick this lock.

To this day I’m not exactly sure what the results or ultimate benefits of our sessions were, seeing as they only lasted a couple of months and we spent most of our time playing checkers. I guess everyone just wanted to make sure where I sat on the ‘sad spectrum’; whether I was merely feeling a little blue or was one glass of spilled milk away from going all Sandy Hook on my classmates.

I’ve seen Fraser for three more periods since then; once when I was seventeen and my mother was concerned I was playing too much World of Warcraft (I wish I was joking), and twice more immediately following my last two breakups, again at my mother’s insistence.

This is the inherent problem with having a therapist for a mother; they’re BIG fans of therapy.

There is a condition known as ‘Medical Student Syndrome’ whereby medical students studying serious conditions and illnesses will have delusions of having such disease and have resultant episodes of mild hypochondria. It is one of my favourite conditions to read about and a shining example of just how counter-intuitive the human brain can be.

I want to propose a new condition, known as the ‘Therapist Parent Complex’. This is where a parent who is qualified in the field of psychotherapy sees their child looking introspectively out the window, is concerned that child is planning a one-way trip to the Westgate, and consequently sends them straight into to therapy.

I shouldn’t complain though, it’s great to have a mother who cares enough about your wellbeing to fork out $180 a session. Three years ago after I announced that my girlfriend and I had broken up, good old Mum came to my room, suggested I see Fraser again, then bought me a new phone. Last year, when I announced yet another breakup from yet another girlfriend, she again suggested I pay Fraser a visit. Still waiting on the new phone though.

You’ll be glad to hear that Fraser has aged better than a Japanese mother of five. Gone is the long hair and motorcycle jacket, replaced instead with a Land Rover and two kids. We’ve transitioned from Professor-student sex fantasy into straight DILF material. Our sessions together have changed as well; less “Dan, can you please just learn to get along with the other kids?” and more, “Dan, can you please just learn how to get along with girls?”. Jokes aside the sessions we’ve had together over the past few years have been outstandingly helpful, despite them being few and far between. They’ve been an exercise in unpacking attitudes and behaviours in my relationships, why I am drawn to certain types of partners, and how best to extract happiness and peace whilst being with another person. I can honestly say I wouldn’t be in a such a good place without them.

…which is why I find it so sad that most people I know seem so averse to the notion of therapy.

A couple of Christmases ago my mother threw a big lunch for all our friends. It was a big occasion; she hired a professional chef, made me wear actual human clothes, and even dressed up as Santa and sat on everyone’s lap whilst doling out presents from her big sack (Fraser heard all about that one). Amongst the people invited were my two best friends and my girlfriend; three of the most important people in my life at the time. Because of their importance to me, good ol’ mum had a special gift for them; they each received an envelope, inside of which was a custom voucher for one free therapy session with one of her colleagues. Her rationale for it was that she wanted to “give the gift of mental health”, and that these sessions were a good opportunity to have a checkup free of charge and see if there was anything worth working on.

To say the reception was mixed would be a lie. It was resoundingly frosty.

I’ve had many long talks with various people over the past couple of years about this story, and it usually ends the same way; people can appreciate what she was trying to do, but would personally find it weird, awkward, and would probably not redeem it. What was intended to be a thoughtful, well-meaning gift to a special few was taken as a personal insult to their mental health status. Not one of the vouchers was redeemed.

There is a large and prevailing issue with the general attitude towards mental health. For many (in my generation at least) mental health is seemingly one of those issues that we can just “get over” and “deal with it”. Just as one can learn to live with an undescended testicle it appears they can also learn to live with their narcissistic tendencies. It saddens me deeply that not only do people treat mental health issues as an obstacle that can be overcome by sheer power of will, but that even acknowledging those issues is a sign of weakness.

Not having lived in any other part of the world I can only make assumptions on this point, but attitudes towards mental health in Australia seem to line up nicely with our identity as a people. We’re battlers. To be Australian has, traditionally, meant a steely resolve and tough-as-guts attitude to overcome adversity. This is fine when rustling cattle or massacring an indigenous population, but doesn’t work so well with mental health.

Another friend of mine was recently going through a hard time. I got a call from them at 1am, drunkenly sobbing to me that they were lost, confused and had no idea what to do (standard early-20’s drama to be sure). I suggested that maybe they should see someone. By the response I received you would think that I just kicked their dog in the face.

And that’s the point; you don’t have to be ‘crazy’ to enter therapy, therapy is for everyone. The biggest hurdle seems to be that most people don’t understand what goes on when you see a therapist. In the most basic of ways, it’s a conversation, albeit one where you do most of the talking. The therapist is merely there to ask the right questions and prompt you in a way that will hopefully unpack your beliefs and past experiences that are driving the behaviours that have brought you to see them.

I can already hear some people going, “but I can talk to my friends about my problems, why do I need to pay someone?”. I hate to break it to you, but your co-worker Janice knows shit-all about how to counsel you on your issues. There is a true art to listening and interpreting behaviour, and you’re best off venting to the person with a degree hanging on the wall behind them.

Ultimately though, no one can help a person who doesn’t want to help themselves, and for this reason no one should ever be pushed toward counselling. It has to be a conscious, willing decision made by someone who recognises something about themselves they want to work on. Then, and only then, can there be a hope for change.

As for Fraser and I, there is no doubt we will see each other again. We just have to wait for a girl silly enough to date me so I can get right to work on ruining our relationship. She better hurry up though, I could really use a new phone.

One thought on “You’re not crazy..”