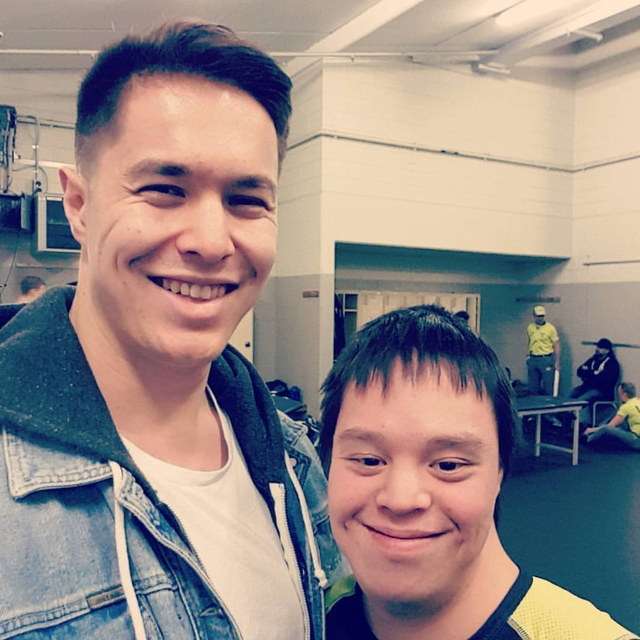 Having a brother with Down Syndrome forces you to have a different outlook on life that you may miss out on with a mentally-capable sibling. It also forces you to adopt certain qualities. More than a few people have told me I have the patience of a saint, which must be because of my brother, and whilst I do agree with them it probably isn’t due to the reasons they are assuming. Whilst I’d love to say that the patience stems from dealing with his mental capacity and needing to explain things about 3 times before he understands, it is far less elegant.

You see, Will, my brother, is the SLOWEST WALKER OF ALL TIME. His gait is legendary. Words cannot describe the glacier-like speed at which he shuffles down the street when we’re trying to walk somewhere. No amount of chastising or encouragement will make him go faster. He is a stubborn man, and he will put one foot in front of the other at a pace he sees fit, which appears to equal the tops speed of a lame vole.

Still, for all the hours wasted crawling around together he has given me some fantastic stories, one of which I will share with you today.

About 7 years ago I received the biggest shock of my life thus far; I was 18 and a student, which meant I spent most of my time at home in bed. This particular mid-week morning was no different. I had a blissful 9am wake-up firmly in my sights, followed by an irresponsibly long shower and grotesquely large breakfast. The standard formula for failing one’s first degree.

Trust Dad, then, to ruin everything by barging in around 7:30am.

“Everyone is out of the house, it’s only you and Will. Keep an ear out for him.”

I let out a noise that was half-grunt, half-a-pox-upon-thee-who-hath-waken-me, and promptly returned back to sleep.

A short time later I heard voices coming from the kitchen. This wasn’t uncommon as my bedroom door opened onto a landing that was directly in view of the main dining room/kitchen area, and I had grown used to sleeping through the sound of people milling about. Today was different. I didn’t recognise a single voice, and there were at least a couple.

The immediate assumption in a situation like this would be there were burglars in my kitchen. This was countered by the fact that we lived in the whitest, most affluent family friendly part of town, where the most common crimes were lame ones like tax evasion and embezzlement.

(As a side note: about a year after this our TV was stolen in the middle of the afternoon, in broad daylight, most likely by a bored housewife.)

Conceding that the voices weren’t going anywhere, and remembering that I was at this moment legally responsible for a mentally handicapped person, I decided it was probably worth getting up and investigating. But only just worth it. Honestly it could have gone either way. I staggered out of bed in only my underwear, rubbing sleep out of my eyes, and clumsily stepped out my bedroom door and into view of the kitchen.

Standing in my kitchen were four fully uniformed police officers. They were casually arranged around the space, all seemingly relaxed and not about to shoot me, all now with their eyes staring at this teenager in his tighty whities.

And in the middle of them all, was standing my brother.

The image of Will standing there in the middle of these officers, with a look on his face that I can only describe as amused guilt, will be burned into my memory forever. It was the middle of spring. There was sun streaming through the windows. Everything was glowing and there were honest-to-God birds singing outside the windows. And the Popo… and my brother. All in my kitchen. All looking at me. And I was almost naked. This is what nightmares are made of.

“Morning officers..”, was all I could think to say.

I’m still ashamed that was all my brain could conjure up. I excused myself, jumped back into my room, threw on some clothes and began the long walk into the lions den. I felt so short, staring up at these giant Officers as they interrogated me. Truth is by this stage I was roughly already a lanky 190cm, so we were probably on even footing, however you feel smaller than someone when they have a revolver strapped to their thigh.

The cops were actually super friendly and almost too comfortable in my kitchen. One was leaning, almost sitting, on the bench top, and I swear he kept making glances towards the kettle like he was hoping I’d offer to make him a cup of tea. We exchanged names, I explained who I was, who William was, and asked in a very polite manner, “why the fuck are you in my kitchen?”. The lead Cop (who’s name I’ve forgotten, so we shall refer to as Captain Morgan) explained that they had received a call from our house phone, and Will had been the one who placed the call. As he told me this I saw, from the corner of my eye, Will assume his guilty pose (hands classed in front, head slightly downturned, mouth relaxed and slightly open, wide eyes). That little fucker knew he was in trouble. The Captain then elaborated that as far as they could understand Will was telling them that his brother had hit him, and that’s why he’d called the Cops.

There was an uncomfortable silence accompanied by four professionally trained pairs of eyes scrutinising my next move.

You see, a few days before all this happened Will had an accident at school. As horribly cliché as it sounds he had managed to walk into a door face-first. He was absolutely fine, but now left with a beautiful, shiny black eye.

I looked from Captain Morgan to Will and his black eye, and back again.

“It’s not what it looks like..”. My second brilliant one-liner of the morning, failing to appreciate that nothing could have made me sound guiltier.

I found it difficult to explain to the Captain and his compatriots then, just as I find it difficult now, what was really going on inside Will’s head when he made that call. The thing about Down Syndrome is that it essentially slows down the mental and intellectual development of the person afflicted. Will has a fairly moderate case, which means that at age 16 he had the mental capabilities of roughly a 4 year old. Without delving too deep into the field of developmental psychology (which is something I definitely recommend you read up about if you’re lame and boring like me), Will was at the stage where a person’s sense of imagination and creativity run rampant. Unfortunately, because of his disability he had problems drawing the distinction between fantasy and reality.

This was quite amusing at times; after watching one of the original Spiderman movies he subsequently spent the better part of three weeks tracking down and contacting real-life Peter Parker’s just to tell them they were a good guy and doing a fantastic job protecting the city. We had to spend a long time teaching him to differentiate between what was real and what was just a story; for when that line is lost Will thinks it’s a perfectly fine idea to call the Police and tell them the made-up tale of how his brother went all Chris Brown on his ass. Not cool Will.

Fortunately for us, the Police actually believed me and were surprisingly cool with essentially being pranked into a house call. I gave the Captain my statement, they asked a few more questions and then they were gone. I let them out of the house and walked back into the kitchen to confront my accuser. He stood there, unreadable in the middle of the room, as we stared at each other in silence..

The little bastard just gave me a half-grin, shuffled slowly the pantry, took out a cookie and waddled back to his room leaving me to contemplate how I was supposed to explain this to our parents tonight.

We’ve had many adventures together since then, but I can thankfully say that he hasn’t tried to get me arrested again..

One thought on “The Chromie Chronicles: Pure Imagination”